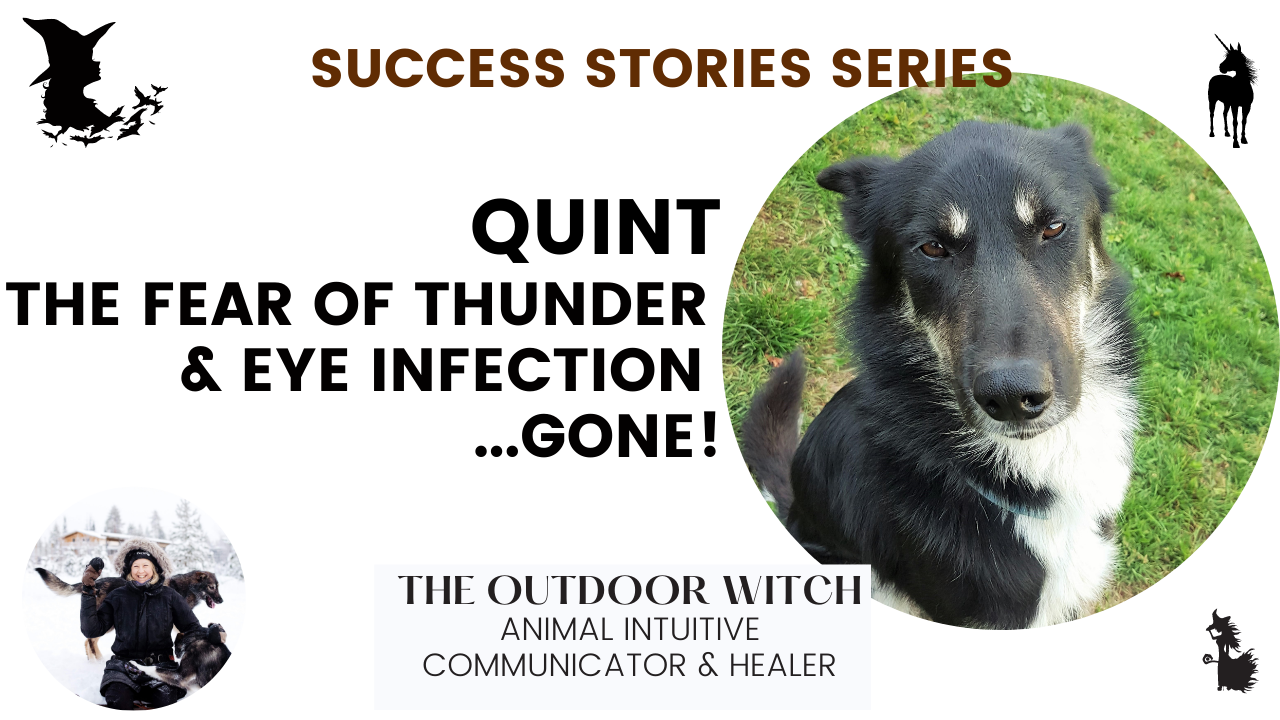 Here's the story of Quint, a Siberian-Alaskan husky born in 2015, and former sled dog re-homed due to epilepsy episodes and high stress when running.

I adopted him in November 2020, 6 months after his brother. They both initially come from a small kennel in Sweden and had to be sent to another kennel after a personal drama happened to their first owner.

Since I had him, he got less and less stressed out, but was still suffering from separation anxiety and hated being fenced and left alone. This got worse when I moved to another place. He was also extremely scared of thunder and shooting sounds, to the point of destroying everything around him. Also he had an eye infection since the trip back from Finland to Switzerland that wasn’t healing.

I started working with him with animal communication and energy healing sessions inspired by tapping, EMDR and NLP techniques on his fears and specific issues. The results were ok, but not consistent. So I decided to work on his entire history. Results were stunning!

Below I explain the complete tapping and communication sessions I did and the results I got.

First session on Quint's past

To start with, I connect with him and see, feel, imagine things as if I were in his skin, as him, Quint.

First, I imagined what he must have been through when he was first sent away from his dog mum, separated from a part of his siblings, trying to understand, see, hear or smell them…. Then later when he was again sent away from Sweden to Finland with 3 of his siblings and no explanation. Separated from his canine friends and other siblings, put into a car, driven for more than 500km and maybe feeling motion sickness then placed in a strange new environment, in a fence, with so many new sounds, noise and strangers. Quint's instincts told him that he couldn't survive without his complete dog pack, causing him much separation anxiety in the new kennel. From his point of view, he must have done something bad and wrong to be sent away at 4 years old from his home and people. He thought he hadn’t been a good dog, and hadn't done a good job with his humans. He felt guilty and responsible. Quint probably tried hard to understand and give meaning to what was happening, trying to see comforting people and places, trying to escape to go back to his first home to go and get his siblings and human family again. He couldn’t see, hear or smell them anymore, his brain couldn’t handle it, causing high stress, anxiety, leading to epilepsia. When one of his sisters was sent back, and not him, and his other sister Peppy arrived instead, it added a huge stress and confused him even further. One of his siblings died or was killed and he thought it was responsible for not having been able to protect her.

When I took Bobby, his brother, and not him in April 2020, it added a huge amount of stress, sadness, feeling of loneliness and lack of understanding to him. He knew after a while that I would come back to pick him up but still, he was sad and anxious, waiting to see us arrive all the time. Seeing me going away now wakes up this tremendous fear of separation and of being left alone.

When we drove away from Finland to Switzerland, he couldn’t see his sister Peppy and his other friends anymore, he couldn't see where we were going, it reactivated his fear of separation, of being unsafe and vulnerable. He had to keep looking hard all the time to make sure I stayed within his sight, he had to check on us to make sure we wouldn’t leave him alone and behind again.

Thinking of him and connecting to him, I felt very high anxiety in my chest and solar plexus, I felt really oppressed

I began surrogate tapping on my left Sore Spot with these Setup Statements:

Surrogate tapping with these Reminder Phrases on all the points, including my finger points until I feel I was done:

After the tapping, my anxiety level was much lower, lots of yawning and release of energy, and I felt really tired. I knew something big had changed for Quint. I thanked him for being such a good boy.

I also cleared some remaining fears in me that it might start again.

After the session, I felt the oppression gone, I could breathe better, I felt a lot calmer. I went to Quint and he was lying outside, relaxed in the sun, despite the military training shooting still going on in the far (we live close by a military training centre).

Some hours later, he stayed alone outside and didn’t try to follow me inside straight away.

That same night, we were faced with a very strong thunderstorm with heavy rain. What a good practice! Quint was much calmer, hardly noticing the noise of thunder… until we got a series of lightning and thunderbolts. Quint started to be more agitated and wanted to be close to us. He wasn’t completely panicked but still uncomfortable. I then remember: I didn’t mention light and lightning specifically enough in my sequence for him…!

A couple of days later, I did another shorter session for him mentioning this time specifically his fear of scary, strong lights.

Even though I, Quint, am so afraid of thunder, loud and strange noise, sounds and strong lights and light flashes happening inside and outside, I now release these fears. I feel safe and secure wherever I am, alone or with my family and pack, and my eyes feel safe to completely heal.

With the following Statements

We had another crazy thunderstorm some time after that session (Summer in Switzerland!). We were away for the evening and when we came back, there was lightning in the sky. Quint was outside, and doing pretty well. I could tell he wasn’t 100% safe but wasn't panicked or anything. Once he was in the house, he got even calmer, and barely reacted when the thunderstorm with heavy rain and thunderbolts hit the house that night. We were impressed!

Nowadays, he doesn't care anymore about thunderstorms once in the house. We can go for a walk even when there's army training days. However he’s still uncomfortable when outside alone with thunder or when we have the army doing canon shot training - but not panicked. I'm confident it will go away with another session. We never had any new epilepsy episode either.

His eye healed within a couple of days! And we noticed changes in his overall behaviour:. He's not scared of being in a travel box or fenced anymore. Once, he even jumped into (!) one of the other sled dogs fences to go see them! If he’s still a bit of a “serious” dog, he’s clearly happier, now wagging his tail more often, starting to be more playful with the other dog.

It's wonderful to see him change so much! Love this boy <3 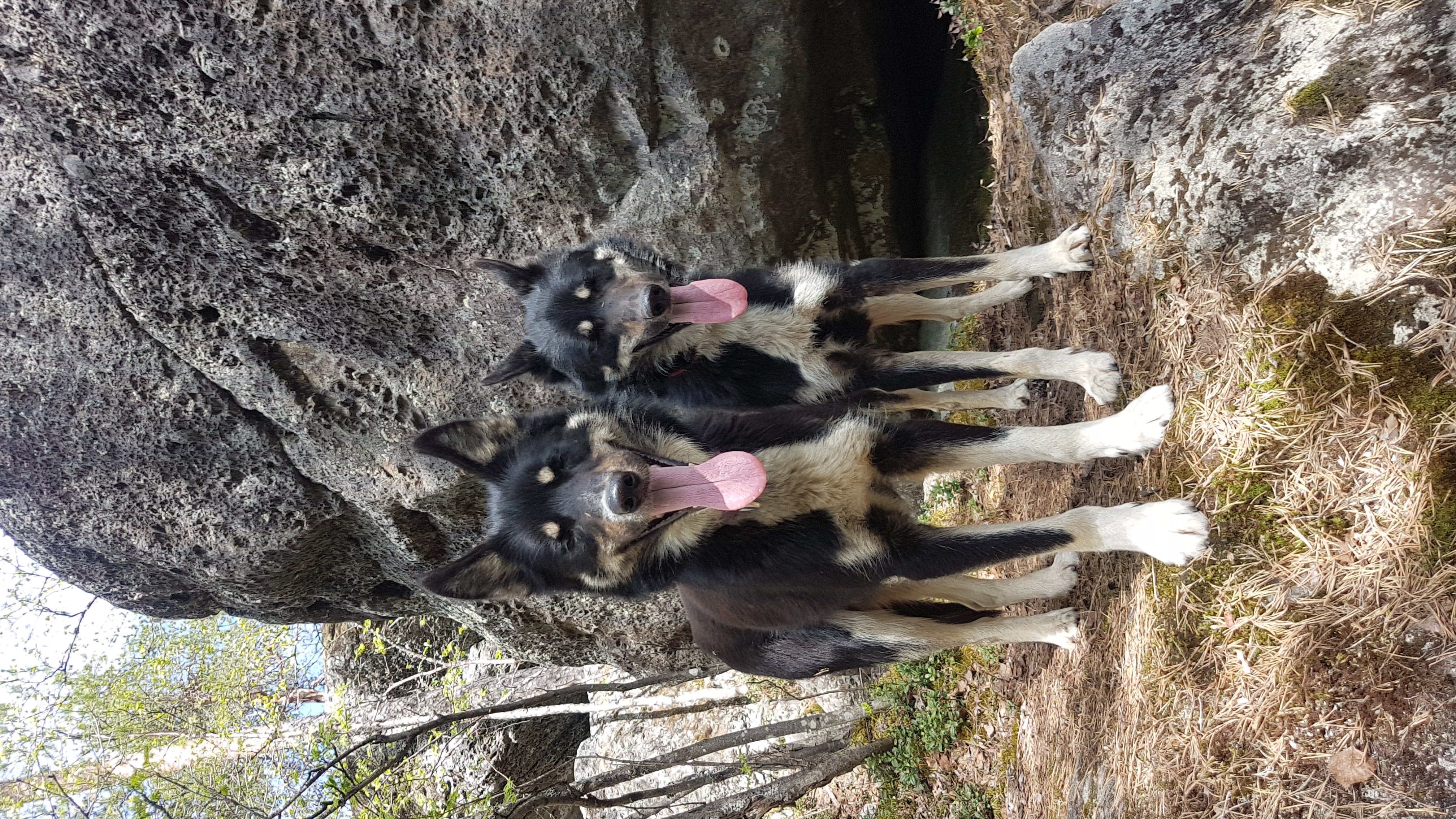 Some fresh air in your inbox!
Get a whiff of adventure and happy paws to brighten your day!

Get a whiff of adventure and happy paws in you inbox!

About Rachel
The Striders Adventures